Tickets available online and at the box office, from one hour before the concert starts

"His Griffes Sonata is an object of wonder: this is how Michelangeli would have played it..." - BBC Music Magazine
‍
“Strikingly original... an interpretive voice all his own” (Fanfare Magazine). In the space of four months, American pianist Stephen Beus won first prize in the Gina Bachauer International Piano Competition, first place in the Vendome Prize International Competition (Lisbon) and he was awarded the Max I. Allen Fellowship of the American Pianists Association (Indianapolis).

Born and raised on a farm in eastern Washington, Mr. Beus began lessons at age 5 and made his orchestral debut four years later. He went on to win numerous national and international competitions throughout his youth, capturing the attention of both audiences and critics. Commenting on Mr. Beus’ competition success, Fanfare magazine writes: “In some ways Beus doesn’t fit the mold of the typical competition winner. His playing is strikingly original and, despite his youth, he has an interpretive voice all his own… Above all, his playing is so natural as to seem effortless and the sound he produces has extraordinary richness and depth, not quite like anyone else’s.”

--
‍
KEMAL GEKIC
‍‍
Flamboyant, daring, provocative, exciting, seductive, and sensitive are some of the words used to describe one of today’s most formidable pianists, Kemal Gekic, whose playing has been acclaimed worldwide by public and critics alike. His daring approach to tone and form, marked him as a maverick in the musical world, a distinction he welcomes: the very strength of his artistry challenges, provokes, intrigues.

As a recording artist, Kemal Gekic has won accolades in Europe, America, and Japan for insightful, original views of the music. His outstanding Rossini-Liszt transcriptions (Naxos) won “The Rosette” of The Penguin Guide for Music, while his recording of Liszt’s Transcendental Etudes (JVC) is generally considered to be the best recording of a set-in history.

Born is Split, Croatia, Kemal Gekic got his early training from Prof. Lorenza Baturina. He graduated the class of Prof. Jokuthon  Mihailovic at the Art Academy of Novi Sad and was immediately given a faculty appointment by the piano department which he eventually directed until 1999.

In 1999 Kemal Gekic made his historical debut at the Miami International Piano Festival and was appointed soon after as  Artist in Residence at the Florida International University in Miami, Florida.

He is also a visiting professor at the Musashino Academy of Music in Tokyo and a guest lecturer at numerous universities and academies throughout the world. He has served as a juror on numerous piano competitions. Programs on his life and his performances were broadcast by RAI Italy, TV Portugal, TV Yugoslavia, NHK Japan, POLTEL Poland, RTV Lower Saxony West Germany, RTV USSR, InterVision, CBC and PBS.


Nikolay Khozyainov is one of the most remarkable pianists of his generation.  His musicality and formidable technique have thrilled audiences around the  world. Still in his twenties, his featured recitals and concerto engagements have  already included sold out performances on all continents at the world’s foremost  stages such as Carnegie Hall and Lincoln Center in New York, Kennedy Center  in Washington, Wigmore Hall in London, The Louvre and Théâtre des Champs Élysées, Salle Gaveau in Paris, Tchaikovsky Hall in Moscow, Tokyo’s Suntory  Hall, Sydney Opera House, Tonhalle in Zurich, Palazzo Quirinale in Rome,  Auditorio Nacional in Madrid and many others.

Born in Blagoveshchensk in 1992, a city in the Russian Far East, Khozyainov  began to play the piano at the age of five and his musical talent was discovered  immediately. He moved to the capital to continue his studies at the Central  Musical School, and at the age of seven he made his public debut with the  Handel Piano Concerto at the Great Hall of the Moscow Conservatory. He  continued his Graduate Studies at the Moscow P.I. Tchaikovsky Conservatory,  which he graduated with the Gold Medal and “The Best Student of the Year” award.

At the present time he lives in Germany, where he has received an Advance Degree at the Hannover Hochschule fur Music under the guidance of Professor Arie Vardi.

Khozyainov’s growing list of awards includes being the youngest finalist of the  XVI International Fryderyk Chopin Piano Competition in Warsaw, Poland in  October 2010. For the occasion, critics hailed Khozyainov as “an amazing artist of  an incredibly large scale. One can feel he is a continuation of the great Russian  tradition of piano playing. Khozyainov was the closest one in the competition to  Chopin’s sensitivity. His performance had a spiritual sound.”

In 2020-2021 Nikolay Khozyainov recorded the Complete Works of Frederic  Chopin.

“The ambiguity he exposed in this only outwardly affirmative work, the way he built up the lines of thematic development, marks him out as a truly important conductor.” - Stuttgarter Zeitung, Germany


Born in Venezuela of American parents, Hobart Earle has earned a reputation on several continents as a dynamic and exciting conductor. He was recognized as one of 30 “Professionals of the Year” by Musical America Worldwide (2014), and in conjunction with leading newspapers,  the Russian Cosmonaut Association named a star in the ‘Perseus’ constellation as ‘Hobart Earle’ (2003).

Music Director and Principal Conductor of the Odessa Philharmonic Orchestra, Hobart Earle has elevated the orchestra to a position of international prominence, unprecedented in the history of the organization, performing in such concert halls as the Musikverein (Vienna), the Philharmonie (Cologne), Barbican Hall (London), the National Auditorium (Madrid), Orchestra Hall in Chicago, the Great Hall of the Moscow Conservatory, Carnegie Hall (New York) and the Kennedy Center (Washington), Davies Hall in San Francisco and the General Assembly of the United Nations.

He has led such orchestras as the Bilbao Symphony, Vienna Tonkuenstler, Noord-Nederlands Orkest in Holland, Odense Symfoniorkester in Denmark, Jerusalem Symphony Orchestra, Sinfonica Siciliana and Orchestra della Toscana, Sinfonia Iuventus in Warsaw, Krakow and Silesian Philharmonic Orchestras, Athens State Symphony, Buffalo and Florida Philharmonics, North Carolina and Miami Symphony Orchestras, Taipei Symphony and such major Russian institutions as the St. Petersburg Philharmonic and Russian National Orchestra. In the opera pit, he has led productions with the Greek National Opera and the Mythos Opera Festival, and in the recording studio, has recorded with the Russian State Symphony and Odessa Philharmonic for Naxos and Toccata Records. His performance of Tchaikovsky’s 5th symphony in Vienna’s Musikverein was recorded by the Austrian Radio live in concert, and awarded “Best Classical Album 2002” at the ‘JPFolks Music Awards’ in Hollywood, California. His recording of music by Myroslav Skoryk was chosen by Naxos CEO Klaus Heymann in the “Chairman’s Choice 2014 – Klaus Heymann’s Favorite Naxos Releases” . 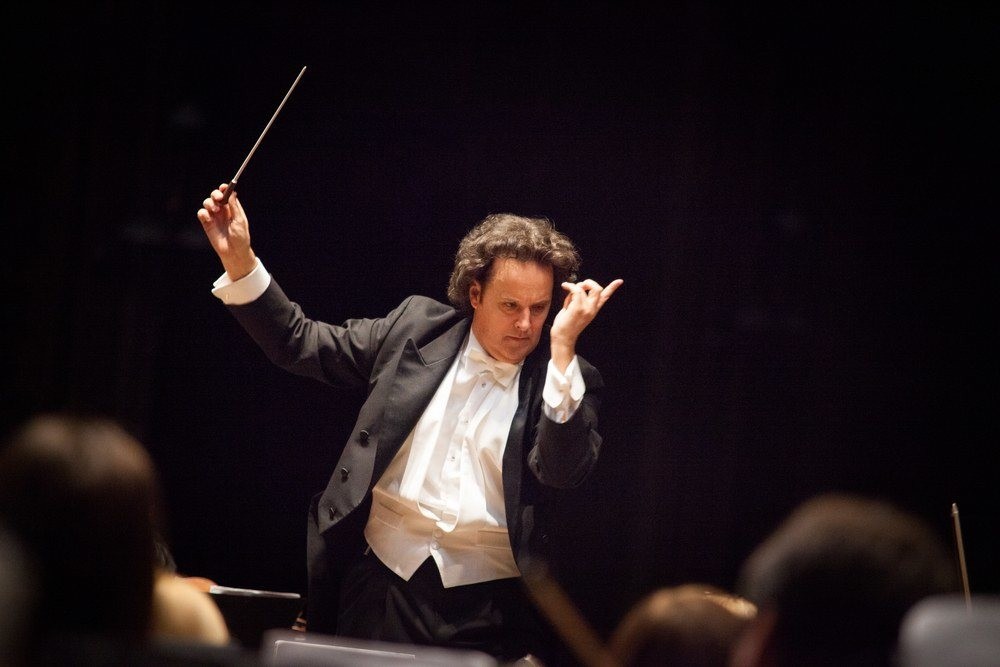