Recognized as one of the most exciting recital series in the world today, the Festival presents artists, both emerging and established, who have distinct voices…

Established in 1998, the Miami International Piano Festival of Discovery is the offspring of Patrons of Exceptional Artists. It is dedicated to the discovery, promotion, nurture, and support of extraordinary artists and the long term goal of ensuring continuity with the great traditions of the past.

Recognized as one of the most exciting recital series in the world today, the Festival presents artists, both emerging and established, who have distinct voices, who challenge convention by demonstrating that there are important things still to be said in both mainstream and rare repertoire, and who clearly deserve extensive careers.

Since 1998, it has discovered and presented dozens of innovative talents and assisted their introduction to recording companies, concert managements, and promoters in this country and abroad.

Now reaching twenty-five years of recitals, the Festival has earned a reputation for high musical standards and has become a potent force in the musical world. Each year, the Artistic Advisory Committee made up of pianists, music critics and scholars on two continents seek to identify extraordinary talents capable of impacting listeners and of leading us into the next “Golden Age” of piano playing. This not a matter of competition but rather of selection based upon criteria of notable excellence.

The Festival is making an indelible mark in the musical world. Since1998, it has discovered and presented dozens of innovative talents and assisted their introduction to recording companies, concert managements, and promoters in this country and abroad. Two of our pianists have received the prestigious Gilmore Artists Award – Piotr Anderszewski and Ingrid Fliter.

As complements to the annual Festivals, lectures, panel discussions ,and master classes by seasoned professionals in music and related have stimulated our performers and audiences.

"The need for such a festival is incontrovertible. To have a showcase festival specially dedicated to new artists is not just an act of faith but a beacon of hope for the next generation that renewal has not been ruled out. In the context of the United States, the significance of such a festival is multiplied many times over. The value of an independent festival introducing the cream of the world’s new pianists to the United States cannot, therefore, be overestimated" 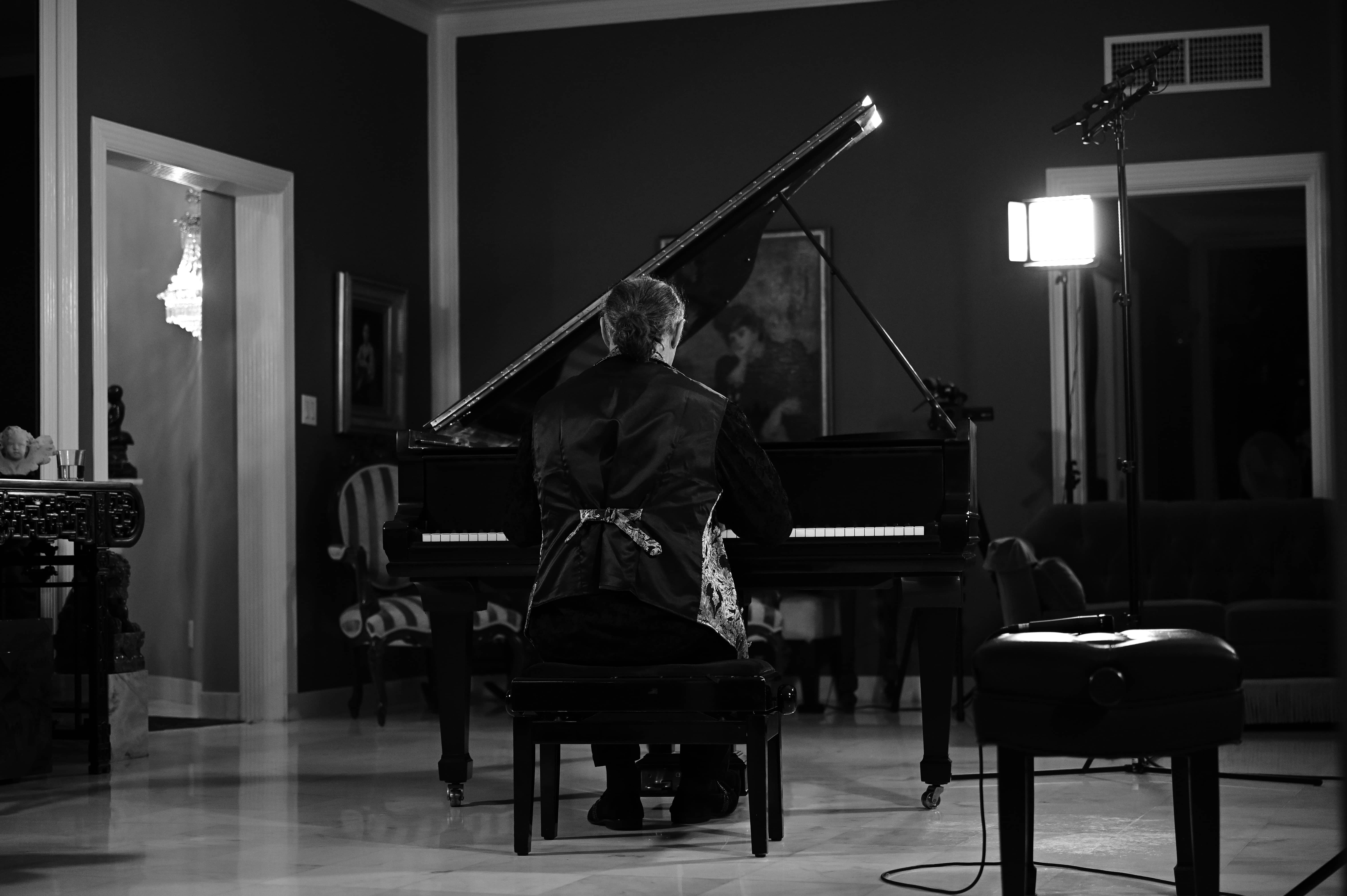 PATRONS OF EXCEPTIONAL ARTISTS WAS ESTABLISHED IN 1997 AS A 501 (C)(3) PUBLICLY SUPPORTED FOUNDATION, DEDICATED TO DEVELOPING THE CAREERS OF FUTURE GREAT PERFORMING ARTISTS. SINCE THEN, THE INSTITUTION CARRIED THE ANCIENT LABOR OF “ARTISTS PATRONAGE”, HELPING THE DEVELOPMENT AND ESTABLISHMENT OF THE PROFESSIONAL CAREERS OF MORE THAN A HUNDRED MUSICIANS FOR OVER TWENTY YEARS.

GISELLE BRODSKY, ARTISTIC DIRECTOR AND CO-FOUNDER OF THE MIAMI INTERNATIONAL PIANO FESTIVAL WELCOMES OUR AUDIENCE BACK TO OUR STAGES IN OUR 2021/2022 SEASON.
READ OUR DIRECTOR’S WELCOMING MESSAGEKNOW THE DIRECTOR
LECTURER IN RESIDENCE

FRANK COOPER, known and admired for his ability to communicate the pleasures of any subject in the arts to his hearers, is Research Professor Emeritus of Music at the University of Miami. Eighteen seasons of twice yearly special courses in Musical Experiences for Adults have set a record for drawing repeat registrants in Miami. The Frost School of Music’s new building contains two teaching studios named in his honor. A fund has been established to be known as “The Frank Cooper Distinguished Musicology Lecture Series.” In his honor, the Weeks Music Library at UM has created“ The Frank Cooper Facsimile Music Collection” which now includes hundreds of scores in manuscript replica from Medieval to Modern times.

He is lecturer-in-residence for the Miami International Piano Festival. For more than a decade, his concert introductions for the Coral Gables Mainly Mozart Festival were annual occurrences, as were his lectures for the Von Liebig Art Centre in Naples (23 seasons) and Naples Philharmonic (5 seasons). Other South Florida venues which have featured Prof. Cooper include the Vizcaya Museum and Gardens, Dade County Center for the Fine Arts (now the Miami Art Museum), Bass Museum of Art, Lowe Art Museum, Fairchild Tropical Gardens, Arsht Center for the Performing Arts (Cleveland Orchestra in Miami) and the New World Symphony.

Called by the Miami Herald “South Florida’s cultural maven” and “a Renaissance man,” Prof. Cooper has lectured in the Coolidge Auditorium of the Library of Congress, Indiana University, MacMaster University (Ontario), SUNY Purchase, and the University of Illinois (Champaign-Urbana), and appeared on National Public Radio, the CBC (Toronto), the BBC (London) and Radio Nederlands (Hilversum). Lincoln Center, Carnegie Hall, the Van Cliburn Foundation, Ford Centre (Toronto), Rialto Centre (Atlanta), TIME/LIFE, Arabesque Records, RCA Victor, Audiofon Records and the International Piano Archives have commissioned annotations from Prof. Cooper, who is the author of more than seventy published articles about music. He is the recipient of honors from the State of Gelderland (Netherlands), the Hungarian Ministry of Culture, and the National Federation of Music Clubs.

The Miami International Festival has earned an enviable reputation as an important, annual international music festival known for presenting an outstanding group of world-class artists who have received great exposure and career boosts through their Festival performances.

The Festival takes great care to create a special atmosphere for its artists, lecturers and staff that is warm, stimulating, and filled with mutual respect and cooperation. The Festival’s commitment to developing and promoting the careers of the next generation of great pianists would not be possible without the collaboration of many outstanding professionals in the field of music. We invite you to meet the passionate group of people that work behind the scenes to make the Festival’s dreams a reality.

Harpsichordist, music historian and research Professor of music at the University of Miami School of Music, Frank Cooper is the senior artistic advisor and annotator of the Miami International Piano Festival. Professor Cooper offers the artists a special opportunity to discuss and develop creative ideas for programming. This truly renaissance scholar is a great source of knowledge and inspiration to the artists and a riveting lecturer .

As an experienced counselor in arts and culture with international outreach, he provides logistic support to both the Festival and the Piano Academy and help guide the marketing campaign and the production of both.

An independent, highly respected sound engineer and one of the most sought-after experts on piano recordings, McGrath offers the utmost quality in reproducing and recreating the experience of the live recitals. For many years, McGrath recorded the Florida Philharmonic under James Judd and now travels to the great stages around the world capturing the magic of great performances to be enjoyed by millions.